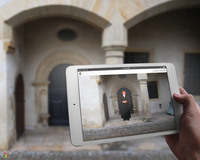 (Mynewsdesk) The Internet of Things changes the world and makes history tangible. The online agency Virtiv from Halle / Saale in Saxony-Anhalt relies on Virtual Reality. For the first time at CeBIT, it presents the application possibilities of the new technique in which the user interactively moves with the help of VR goggles through virtual spaces. Take the step together with us at CeBIT in Hall 6 / Stand B30 (http://www.invest-in-saxony-anhalt.com/cebit-2016)

The young online agency Virtiv from the city of Halle in the German state Saxony-Anhalt has been relying on virtual reality (VR) in advertising for five years. Now they are presenting the possible applications of the new technology, which moves the user interactively through virtual rooms with the aid of VR glasses, for the first time at the CeBIT. Virtiv has already developed such 360-degree scenes and tours for hotels or large arenas. The technology of the future from Halle is also already being used in tourism.

Virtual reality is also already reality in Saxony-Anhalt. Having a look around in a hotel in the Harz mountain region, exploring an ice stadium, walking through a museum or taking a sightseeing walk without having to leave your own house – all this is possible! And the world of virtual reality is developing at breakneck speed. The young, creative online marketing agency Virtiv from Halle is right in the thick of it. The idea: to utilise VR technology in marketing.

Digitalisation has many faces in Saxony-Anhalt, for example, that of Martin Luther. The Halle-based Virtiv agency has now developed a special virtual tour through the Luther memorial sites on behalf of the Mansfeld-Südharz Tourism Association. “For instance, the camera of a smartphone or tablet recognises the local portal of the Luther death House in Mansfeld – and puts the Reformer incarnate into the picture. Actor Hilmar Eichhorn poses as Luther and knocks on the door, turns to the viewer and tells of his childhood in this house.”

“We provide reality with additional contents such as videos or animations. I call this expanded realities”, says Steffen Melzer. Together with his partner Daniel Mischner he founded the Virtiv online agency in Halle five years ago. The name says it all. Both of the Halle natives were fascinated by virtual reality that emerged at that time. As Melzer says, they still are.

Virtual reality is the immersion into a computer-generated virtual environment in real time. A large number of 360-degree photos which a computer merged were strung together for this purpose. Now the viewer can wander through 3D landscapes, or for instance through the O2 World Arena in Berlin, with the aid of VR glasses which are inserted into the smartphone. The Virtiv agency from Halle created this arena tour.

The start-up business found ideal founding conditions at the Central German Multimedia Centre (MMZ) in Halle that is sponsored by the state of Saxony-Anhalt. “For over a year we worked on making the trend usable for marketing. We also developed special, entirely new and innovative software solutions for this purpose”, says Melzer. The Virtiv online agency produces a 360-degree experience for its customers. As a result, hotels or restaurants can show their premises to guests, car dealers can allow interested parties to get into cars, and fashion houses can show their models all around. Word has gotten around. Last year Virtiv became the first licenced agency in Saxony-Anhalt which is allowed to work for Google Business View. This is the counterpart to Google Street View. Outdoor photos are thereby complemented by virtual tours in buildings.

After five years the small agency from Saxony-Anhalt has established a name for itself with the innovative specialisation in virtual reality. The Halle businessmen have relied on the right trend. Steffen Melzer is certain that virtual reality is currently experiencing its breakthrough. For example, a fast food chain in Sweden is currently advertising with VR glasses, which in the meantime consist of folded cardboard.

Virtiv also offers such glasses to their customers for their marketing. The small team is constantly working on new projects. “The VR trend is going towards motion pictures in which the viewer moves. For example, a person could film a live concert or a football match in a stadium”, says Steffen Melzer. Or sit virtually in a football stadium. “Then the VR glasses could be sold together with an app in the club’s fan shop”, says Daniel Mischner.

The Investment and Marketing Corporation Saxony-Anhalt mbH (IMG) is the business development agency of German federal state of Saxony-Anhalt.

It provides all services relating to company establishment in the state. These services ranging from investor acquisition via business consulting trough to locating marketing for the business and science location as well as tourism marketing are united under one roof.

As one-stop agency, commissioned by the Ministry of Sciences and Economic Affairs of Saxony-Anhalt, IMG supports companies in the realization of their investment project. IMG acts as partner for business, providing individually tailored consultancy in all matters – from finding a suitable site, information on subsidy and financing matters, to dealing with public authorities up to all matters concerning the realization of the settlement or investment.

Further information about our services you find here: http://www.invest-in-saxony-anhalt.com/about-IMG.